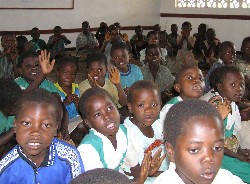 In just one of the book distribution programs carried out by the Malawi Project medical books valued at over 2,700,000 Malawi Kwacha ($30,000.00) were awarded to the Kamuzu College of Nursing in Lilongwe. Accepting the books on behalf of the school was Mrs. Christina Chihana, the principal of the school and wife of the second vice president of Malawi. Mrs. Chihana noted the importance and value of the books to their educational program since so many of the books in their small library were outdated, and promised she and members of her staff would be visiting Blessings Hospital in order to see how the school could work closely with Blessings. Also in attendance were representatives from Malawi radio and Malawi television, as well as a representative who forwarded the story to “The Nation” newspaper, one of the country’s leading newspapers.
During the years of the distribution programs by the Malawi Project five 40-foot trailers of textbooks have been distributed to the universities and secondary schools in the country. During one ceremony where the Minister of Education was asked to speak he pointed out his feelings that the Malawi Project, through its education programs was changing the education outcome of the nation of Malawi.

Another of the programs being executed on behalf of the people is the program of literature distribution. An Indianapolis, Indiana U.S. printing firm and a mid-west paper supplier were responsible for printing and shipping over 125,000 HIV/AIDS brochures to hospitals, churches, and community centers. An additional 100,000 pieces of literature advocating moral character and community service were prepared and distributed. Many of them were prepared with a Malawi audience in mind and large percentages have been translated into the Chewa language.

During the early years Project members helped to support a community pre-school in the Mponela Trading Center, approximately 35 kilometers north of the capital. The school, established in 1995, had the support of the Project who paid the cost of the building as well as teacher support for five years. Then a phased program of withdrawal turned the full operation of the school to members of the Mponela community.

Another program of education focuses on a frontal assault on the HIV/AIDS crisis. This program uses tiny elastic bracelets and imitation pearls to supply teens with a visual focus for a commitment they make to a life of moral purity. The program is intended to keep HIV/AIDS from entering their families. This program is carried to the countryside through American and Malawi village women who take the message to the young people of the cities, trading centers and villages of Malawi.

An effective program of teaching about AIDS prevention is visible in a simple imitation pearl bracket worn by thousands of Malawi girls and young women.
It begins with seminars and gatherings of groups of women to discuss saying “no” to unwanted sexual advances and remaining pure until the wedding night. The seminars stress the many ways HIV can be acquired and how this next generation of Malawians must take steps to avoid the scourge that is killing so many. The seminar concludes with an offer of a small hand made imitation pearl bracket to be worn by any of the young women who will try to restrain sexual advances and remain pure. Suzi Stephens, Medical Director for the Malawi Project, encourages them with these words, “You are the next generation of Malawi mothers. The AIDS that is killing our nation can end with you. But you must be strong. You must be brave. You must say no to multiple sex partners.”
At the conclusion of the seminar each girl that makes the commitment to purity is given one of the bracelets as a reminder to say “no” when the temptation confronts them.
Already there are girls from earlier seminars who see Suzi in the marketplace and run up to her extending their arm to show her the bracelet, hug her and say with pride, “Mama I married this year. But I remember your words for me to be with only my husband and I did it. I did it.” It is all the reward that Suzi needs for her words of warning and encouragement.

During the year members of the Malawi Project conduct various training and leadership seminars in order to deal with moral character, leadership qualities, and AIDS prevention.