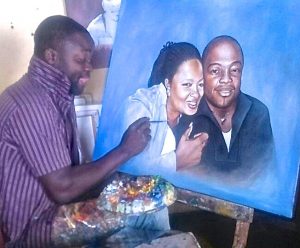 “Life is like a mirror; when you smile, it smiles back at you.”

“We have to work to achieve what we want in life.”

These are some of the thoughtful sayings that led off an interview with Malawi artist Kingsley Maigwa in August 2017. The interview was to highlight the success of this self-made artist. His sayings were just the beginning that opened the door to his description of a life of climbing what appeared to be impossible mountains so he could reach the goal of being an independent, self-supporting artist. As he detailed his years of struggle to reach his goals it was impressive. He actually started his dream to become an artist at the age of 7, and from that time on nothing could deter him from his goal. Even when his friends told him he could never survive on what an artist could earn, he continues toward his goal.

Years later he would successfully prove them wrong. He climbed the mountains of opposition, and reached the goal of having his own studio, his own house and his own car, all of which he credited to God whom he said, “made it all possible”. It was evident he was a successful artist, but by many who came in contact with him along the way he was seen as a good man, and a respected Christian.

Suzi Stephens of the Malawi Project reflects on her contact with him. “We met Kingsley at church services in Lumbadzi in early 2001,” she recalls fondly. “We were helping build a major hospital and children’s home just south of Lumbadzi, and Kingsley showed an immediate interest. It wasn’t long until his paintings were attracting an appreciative audience of visitors who were coming to help at the hospital. With their purchases Maigwa was able to donate hours to painting warm and friendly scenes both inside and outside the hospital. Even more than the paintings he sent back home with visitors, he unselfishly offered hours of time to teach children at the village how to paint. Years later he would smile and note he had taught the students so well they started selling their paintings to the visitors and they put him out of business in Lumbadzi. He reported this with no remorse, but as a point of pride in what he had been able to offer these young people.”

Stephens continues, “In 2010 I was critically ill while in Malawi. As I was recuperating before returning to the states, Kingsley came to the house every afternoon to visit and give me painting lessons. He was a great encouragement and frequently applauded my success in painting African scenes. Not once did he request financial assistance for all of the time he spent with me. There is no doubt that he added greatly to my recovery, and I will never forget him for this. This past year we gave him the needed funds to paint ‘happy’ pictures on the walls of the children’s ward at the Korean Hospital north of Lilongwe. Just as he had done years earlier at the hospital we were helping build he rose to the challenge and imprinted lasting memories on the walls for the children to see when they entered these medical facilities.”

In the 2017 interview Kingsley modestly noted a number of groups with whom he had successfully worked with his painting. They included, UNICEF Malawi, Ministry of Heath, World Vision, Youth in Prison, and the Malawi Project.

Kingsley ended the interview with his dream to “step his feet into the United States and do exhibits where African culture, traditions, and wildlife could be highlighted to gain more exposure for Malawi.” He added, “I also want to help young, less privileged people by training them in life skills and the talent of painting so they can earn a living along with their spiritual life.”

Editors Note: We are deeply saddened to report Kingsley will not realize his dream. In an unfortunate set of circumstances, on the night of November 2, 2017 Kingsley lost his life. He will be missed, and the world will never see the scenes of Africa that would have sprang from the mind, heart and hands of this talented painter.

To see pictures of a number of Kingsley’s paintings go to: https://www.flickr.com/photos/malawiproject/with/37836634364/

Linkedin
Posted in Be The Change, Malawi, Sustainability, Travel
Subscribe to our Newsletter
Donate