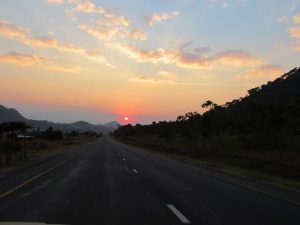 Near Sunset, Central Malawi … We had gotten a late start from our southern base, and were still too far from the capital as the sun challenged us to a race against the darkness. Here were the simple rules of the race; the sun would race for the western horizon and disappear behind the mountains along the border with Malawi and Mozambique. It would take any light that remained with it. If we could we would try to beat the sun and get to Lilongwe before the light would disappear. It was obvious the sun was several points ahead and we were going to travel the last few kilometers in the dark.

Dark is Different in Malawi

You need to know “dark” does not mean the same thing in Malawi as it does in other parts of the world. For instance in the U.S. “dark” means all kinds of lights along the highway, well lit exits, houses and smaller communities along the way with a vast array of street lights, billboards, lighted buildings, city light reflection from low clouds, and the like. In Malawi “dark” means “DARK!” It is darkness that can best be described as, “you could cut the darkness with a knife.”

To travel along roads in Malawi in the dark is to chance hitting an unsuspecting animal that has wondered on the roadway, getting too near the edge of the pavement, and having your car abruptly plunge off the road after hitting broken pavement or chuck holes that are literally a foot or more deep, or striking a person walking along the edge of the pavement in the dark. This ignores the possibility of a breakdown where there is no place to pull off the main pavement, or unknowingly coming upon another vehicle that is broken down dead center in the road with no lights anywhere to signal the probability of a head on collision just beyond the high beams of your head-lamps. Bandits? Oh yes, almost forgot them. Guess they might be the least of the concern or problem. All of the others are much higher on the list.

But, can’t think of all that right now. Need to concentrate on getting to Lilongwe. We are still too far out and racing the sun … and so far the sun is winning!