Unemployment Over the Top 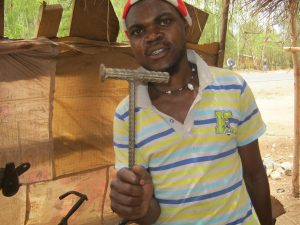 Thondwe Carpentry and Joinery – Zomba, Malawi… While Malawi has reduced its birth rate from 7+ children per family to 5.5 the per cent of the population under 24 years of age stands at a whooping 67.02%. With a medium age of 16.5 years, the number of young people dependent on someone else to support them stands at 87.9%. This translates to extreme difficulty finding a job, and the near impossiblity of becoming self-supporting without someone to help. While the government is trying to train young people in technical entreprenourship skills to help them become independent, there are far more young people than the system can equip.

The Story of Lawrence Chimwala

There are far too many young people like Lawrence Chimwala. He has acquired the skills to be a carpenter, but is lacking sufficent tools to reach his full potential.

As a way of helping young people like Lawrence, the Malawi Project is distributing carpentry tools to young people who are working for themselves.

Lawrence can produce a range of products such as sofa sets, display cabinets, chairs, and doors. Up to now his challenge has been access to tools to do a better job.

Wilson Tembo, the in-country director for the Malawi Project, reports, “As I entered his workshop made of grass, I was greeted by a small bag of old, used tools, many he had made himself. ‘This hammer, is not genuine, I had to bring two pieces metals to a welder who helped me make this ‘hammer.’ As he showed me the tool, it was evident he is more motivated to use his skills, but has no tools. The new hammers will allow him to produce quality products that will help him earn more income for his family.”

For more pictures of Lawrence, his bamboo workshop, and his workmenship go to: https://www.flickr.com/photos/malawiproject/with/38503960296/

Linkedin
Posted in Be The Change, Sustainability, Travel
Subscribe to our Newsletter
Donate