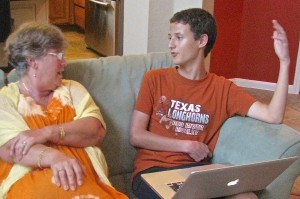 Nolan explains the computer program for Malawi that he began.

Austin, Texas … Almost everywhere one goes today the number of kids on laptops, cell phones, computer notebooks, and other electronic devices overwhelms the senses.  They’re off in another world of tweeting, texting, Facebooking… communicating with a friend in some other place, and some other realm.

Enter a young man from Austin, Texas who is walking around with computer laptops under his arm. Not just one laptop, not even two of them, but to date over 70 of them. Nolan Read is a member of the Western Hills Church of Christ, a Boy Scout reaching for his Eagle Award, and a committed devotee to helping the people of Malawi. Though Nolan is immersed in the computer generation, talks the language, and lives in digital realm, he is also fully involved in a generation that is committed to helping people who are less fortunate than he and his friends.

Focused on Laptops
When Nolan set out to reach the highest award in Scouting he discussed it with members of the Malawi Project, who are involved in Malawi support programs with the Western Hills church. He proposed gathering laptop computers for Malawi as part of his work toward the rank of Eagle, and he put his full effort into its success. Nolan chose computers because he knew how important they had become in his own education, and he decided laptops, instead of desktop units, since they would work better because of electrical surges and unreliable service in having computers plugged in to the grid sub-Sahara Africa. He set strict standards on the kind of used computers he would accept, and he and others working with him, spent countless hours cleaning up and preparing the computers for shipment. By the time he reached his goal he had acquired over 70 laptops.

A Mountain Moving Family
George Bomar, minister for the Western Hills church notes, “In recent months the faith of Nolan and his sister Brielle has been an inspiration and a challenge for all of us at the church. Brielle actually obtained 33,000 school textbooks for Malawi schools, and Nolan has been equally successful in his Boy Scout Project in obtaining these laptop computers. They have set a faith course for all of us to follow in setting a path of service that would appear to be out of reach for many who do not share such a faith commitment. Their faith has shown us all that with God nothing is impossible.”

“We had little doubt about his success when he started the project,” notes Bryon Bhagwandin one of the founders of the Malawi mission program at Western Hills. “Nolan has a heart that wants to make a difference,” Bryon adds. “He has the support of a great Christian family, and shares with them a willing spirit that reflects the scripture that ‘with faith one can move mountains’.  The Reads are truly a mountain moving family.”

If you would like to donate your used computer  (in working condition and with a power cord, please), you can send them to:

Laptops for Malawi
Attn: Nolan Read
5217 Summerset Trail
Austin, TX 78749
If you have questions you can contact Nolan at:
nolanread@gmail.com
We hope to report the delivery of these laptops at  a future date.