Reaching Inside the Prison System

The Bible gives us the follow instructions about those who are in prison,

“Continue to remember those in prison as if you were together with them in prison, and those who are mistreated as if you yourselves were suffering.” (Hebrews 13:3)

“to open eyes that are blind, to free captives from prison and to release from the dungeon those who sit in darkness.” (Isaiah 42:7)

Lilongwe, Malawi …Today in Malawi, Central Africa churches of Christ are focused on a prison ministry that is reaping great rewards. “While still in prison prisoners are being set free from sin, through preaching and the distribution of Christian literature.” The prison ministry was started in 2005, and is now being executed all over the nation. Wilson Tembo, warehouse manager for the Malawi Project’s southern warehouse in Thondwe, Malawi reports large numbers of prisoners are learning about Christ and being added to the Kingdom through the efforts of the ministry. Through the years the Namikango Mission with major support from the Malawi Project has supplied large amounts of school supplies, Bibles, and other Christian literature for use in the prisons. Earlier this year the Malawi Project sent an entire trailer of Bibles, Commentaries, and other Christian literature. A large amount is being taken to the prisons. One of these prisons is the Maula Prison in the capital city of Lilongwe. 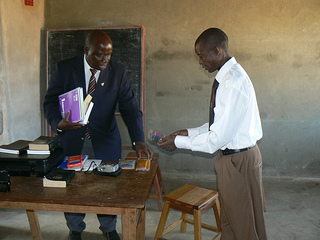 The Malawi prison system has 23 district prison stations. Maula Prison is a major facility in the capital city of Lilongwe. Established in 1960, it currently houses over 2,000 inmates.

Michael Wines, in the New York Times on 6 November 2005, wrote about African prisons, under the headline, “Wasting Away, A Million Wait in African Prisons”,

“Prisoners deal with dirty water, foul toilets and intermittently working showers. Cells built for 50 or 60 people now hold up to 150 people. Prisoners sleep on blankets on the floor too tightly packed even to turn around. One inmate awakens the rest each night for mass turnovers. The most privileged inmates sleep on their backs, ringing the walls of the cell. Everyone else sleeps on his side. There are no prison uniforms, no blankets with which to cover themselves, and no soap. Inmates have a monotonous diet of nsima and beans with water.”

Pete Larson, a human rights advocate, who visited the prison in 2011, notes:

“The conditions are absolutely inhuman. There are more than 2000 men packed in to this small compound, and sleep 200 to each 20 by 30 building. A quick calculation makes you realize that these men would have to sleep sitting up to be able to fit in the buildings. Some men, in prison whites walk freely in and out of the compound, which looks more like a concentration camp than a state run prison.”

Another visitor who visited recently notes,

“In Malawi, one of the most impoverished countries in Africa, the living conditions are appalling. Prison cells designed for thirty prisoners now house up to one hundred and sixty.”

Malawi’s over 13,000,000 citizens have only 28 legal aid attorneys and eight prosecutors. For some, the only chance for freedom comes with the gospel of Christ.

“I needed clothes and you clothed me, I was sick and you looked after me, I Was in Prison and you visited me.” (Matthew 25:36)