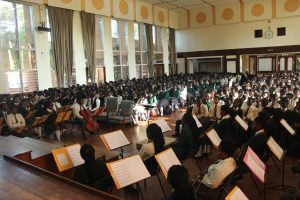 Kasungu, Malawi … Malawi’s first President established the Kamuzu Academy for students whose scholastic standing placed them in the gifted student category. President Banda recognized that Malawi would need business, government, and community leaders who could excel; thus, a school that could stand out in the crowd, and students who would lead the nation forward. What developed was a school like no other, one that would be recognized as “the Eton of Africa,” a recognition of its high level of education parallel in many respects to Eton in England.

In Washington DC there is also an elite school, the Holton Arms School for Girls. During the school year of 2017-18 the sixth grade class, with the encouragement of teacher Sue Owens, led the girls in a project focused on encouraging students to think creatively. Each student chose a subject, conducted extensive research, and then prepared a spiral bound book about what they learned., with subjects both wide and varied. In many cases, the books explained the creation and development of things as simple as the history of the drinking fountain, to popular subjects such as the History of Basketball, the Art of Swimming, and All About Soccer. Other subjects became more technical such as The Invention of the Piano, History of the iPhone, The Amazing Echo, and the background on Vaccines. 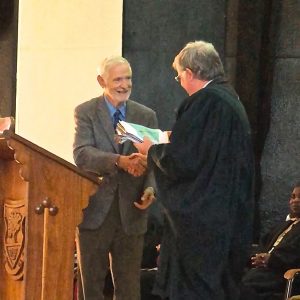 When preparing for a trip to Malawi members of the Project’s Board of Directors decided the work of these students was too important to simply send in a shipping container. These books needed to be delivered to just the right school to stimulate the kind of thinking that would move students to create a bold new future for the nation. Kamuzu Academy was the obvious choice. Each member of the team packed a number of the books in luggage they would carry with them to Malawi.

With Malawi’s Mother, Mama Cecelia Kadzamira in attendance, and the student body and staff of over 600 gathered in the main auditorium, Richard Stephens, a member of the Board of Directors stepped to the podium to explain the purpose of the books. He then presented them to Acting Headmaster Andrew Wild. In his response, Mr. Wild expressed, on behalf of the student body, appreciation for the books, and noted they would be placed in the school library where all of the students would be able to take advantage of them.

The school orchestra highlighted the program with the theme song from, “Out of Africa,” then at the end the inspiring strains of the National Anthem of Malawi.

Pictured are the student body and staff, gathered for the morning assembly, at which time the books from America were introduced and presented to the school, and Richard Stephens, from the Malawi Project presenting the books to Acting Headmaster, Andrew Wild.