Lilongwe, Malawi … There was no going away party, no gold watch, and not even a single tear shed. TC left the Mobility Ministries production facility in Demotte, Indiana on March 26, filled with 158 adult-sized mobility carts, 78 child carts, 50 boxes of books and tools, and 12,000 pounds of used clothing. TC faced a long and sometimes dangerous route to its destination. On this cold March afternoon TC traveled north into heavy Chicago traffic, then, at the Bedford Park rail yards was lifted onto a long train of containers headed east.  Soon it was racing at breakneck speed along the rail line toward New York City, and the east coast shipping port. TC (short for Triton’s trailer # TCNU 8453400) was about to leave the U.S. for the last time, and no one seemed to care. Trips like this were not new to this experienced trailer, as the previous five or six years had seen TC and most of its friends traveling the world multiple times with little downtime in between. Sitting idle is a “no, no” for shipping containers like TC, as downtime costs the company too much money. Still one would think someone, someplace would care that TC was leaving on dead-end, a one-way trip.

Port Stops in Pakistan and India

Once at sea aboard the APL Antwerp TC buckled up and faced forward, boxed in by hundreds of other containers. (This ship can hold as many as 4,050 forty-foot containers.) Leaving port on April 5, the Antwerp carried TC first to Norfolk, then to Savannah and Charleston before turning east. After days of bobbing up and down in the Atlantic, Gibraltar came into sight, then the pristine waters of the Mediterranean, and finally the crowded, narrow passage of the Suez Canal.  Many people lined the shore, yet few seemed to take notice. The passage was uneventful, as the waterway widened, and the ship reached the Red Sea. After porting at Jeddah, Saudia Arabia the ship moved southeast through the narrowing passage off the coast of the African nation of Djibouti.

Turning east into the Gulf of Aden the ship’s screws kicked up long white steamers of frothing ocean, as it passed through dangerous waters, protected from pirates by warships positioned in the gulf to safeguard international shipping. Passing safely through the Gulf, the ship turned west-northwest to stop at Port Muhammad Bin Qasim, Pakistan, southeast of Karachi, followed by port stops in Mumbai, India, then back up into the Gulf of Kutch in order to reach Adani Port, Mundra, India where TC was again offloaded onto the docks.

The Unsafe Waters of the Gulf

After 6-days TC was picked up by the Calliditas and carried through the Gulf of Oman, and the dangerous Strait of Hormuz, where it safely ported at Dubai, United Arab Emirates. Here it was offloaded yet again. Five days later it was picked up by the CMA CGM Manet and set sail along a southerly course along the east side of the African Continent. Stopping first at Mogadishu, Somalia, then Mombasa, Kenya the ship finally reached Nacala, Mozambique where TC was offloaded on June 22 for the overland transit to Lilongwe, Malawi.  It had left Indiana on March 26 and safely reached the nearly completed Action for Progress distribution center on July 31, 2019. After 4 months in transit TC was home, its final destination.

Lilongwe, and Home at Last

Assisted off the truck by a large crane TC was carefully placed on concrete footings where it was nearly overshadowed by the vastly larger Action for Progress Distribution Center. But this looked pretty exciting and was certainly not a bad way to retire; helping care for people for the rest of your life. Besides, in just a few days TC would witness the completion of the warehouse, the grand opening ceremony, and would be able to assist the AfP people in helping others. Not bad at all! 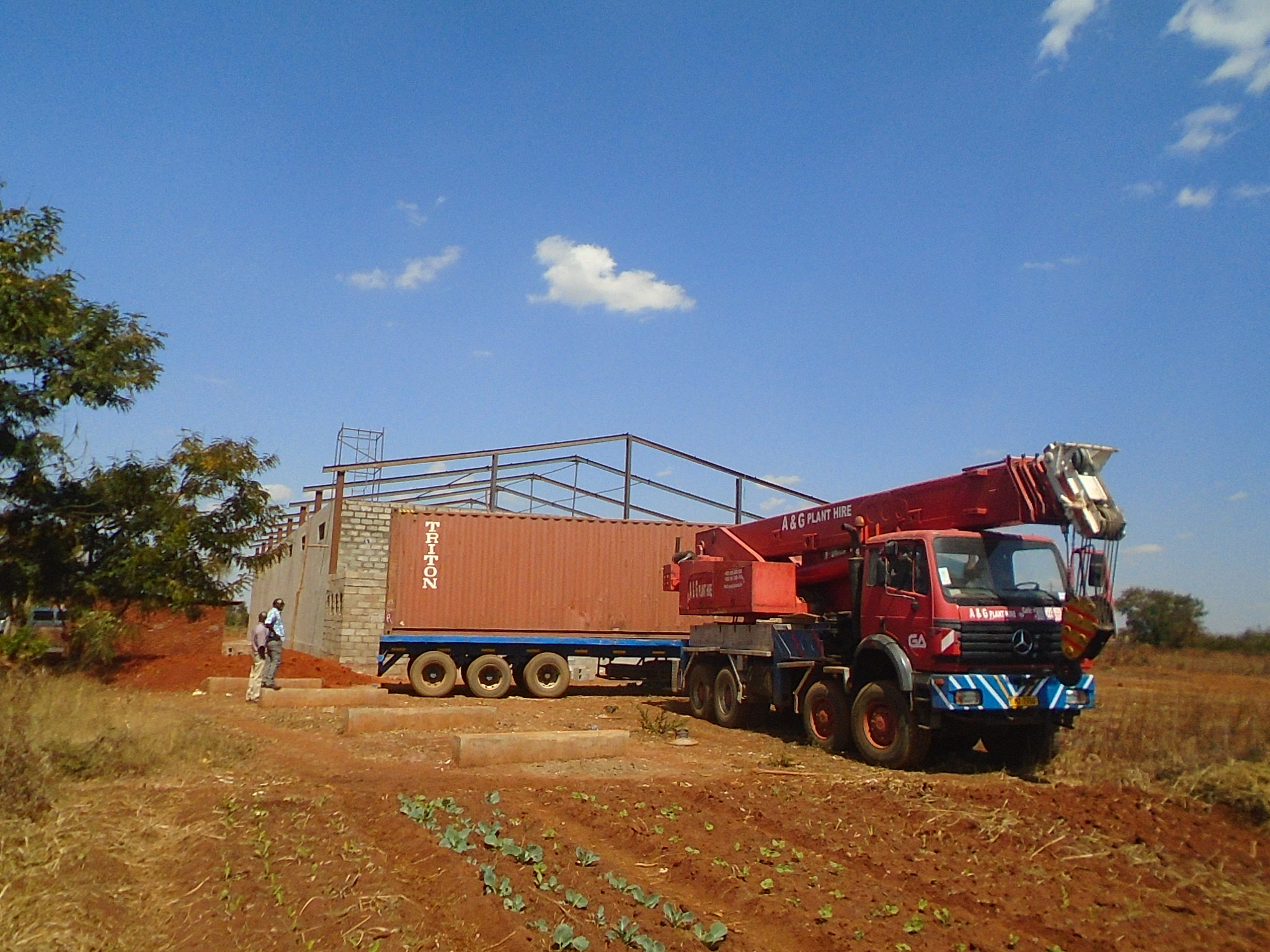